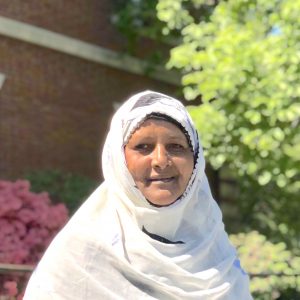 Fatima is originally from Eritrea. At the age of 16, she was forced to flee her country after members of her family were threatened and some killed. Fatima spent 30 years in various refugee camps in Sudan where she had 7 children. Fatima arrived in the US along with her children in 2016. Fatima enjoys coming to OWC to get out of the home and gain sewing experience.