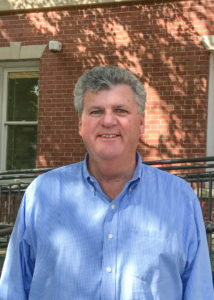 John Canon first heard about the VITA program in 2005, when he was coaching basketball at the Boys and Girls club in Southport. A referee who had been a volunteer preparer told him all about it, and John got curious. Twelve years and thousands of returns later, John is entering his fifth year as the site coordinator here at Burroughs. At the time he started, John knew only a small amount about preparing taxes, and the good it can do for the community at large.

Now he can answer almost any tax question you throw at him, and he’ll do it with a smile on his face. People like John are what make the VITA program and Burroughs Center such a success. He is a tireless helper, and is always more than willing to give his assistance to anyone who may need it. While it can be fun plugging all those numbers in and seeing he did everything correctly, John admits that his favorite part of the job is seeing taxpayers’ faces light up when they find out they’re getting a big return. That’s what keeps him going, and that’s why he’s been involved with the program for over ten years.

John understands the impact and importance people can play in others’ lives, and he continues to be motivated by the joy and appreciation his clients show when he finishes preparing their taxes for them. That’s the real reward, and that’s what makes VITA so special. Thanks John, and thanks to all our hardworking VITA volunteers!